Ura – a Valley in Central Bhutan 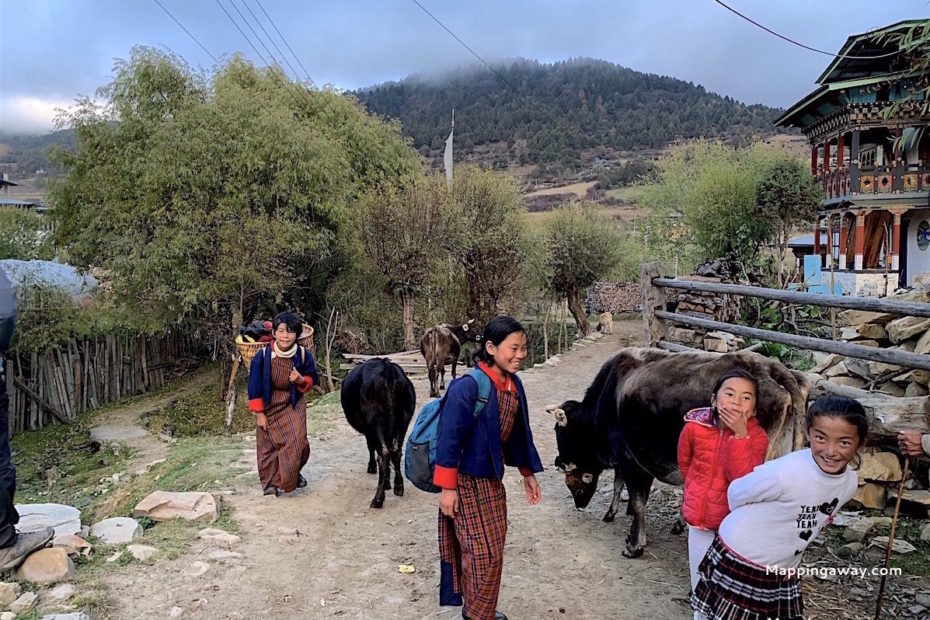 At the end of Bumthang district, Ura valley lies at 3100 meters elevation. This valley has a rich history and long-tied to Buddhism. Ura was a hidden valley for Ugyen Guru Rinpoche (Buddhist master) when he passed here in the 8th century. It marked Ura’s first contact with Buddhism.

At the turn of the 13th century, many Tibetan scholars made their way to Bhutan. A few old schools of Buddhism are found in the valley. Three more villages scattered on the valley’s other side. Ten villages make up the Ura’s village group (gewog).

We arrived in Ura Valley in the late evening, worn out from the 10 hours drive from Thimphu, the capital of Bhutan. We called the homestay run by Dr. Karma Phuntsho’s sister (the author of the History of Bhutan). We were told that the geyser was not working. It turned out to be that electricity is a big issue in remote Bhutan.

. At nighttime, the electricity pole burst into fire sparks :). The owner’s family rushed to put them out.

The main road is behind the valley. Explore the valley on foot is the only way. Everywhere in this valley is a picnic spot. You can dance or run in the meadow :).

Shingkhar is a village about 10 km from Ura. Read my post on Shingkhar.

Early morning, Ura valley enveloped in morning dew, lush green meadows covered in a frosty veil. Dogs barking from a far distance did not awaken the sleeping valley. We were the only two walking in this valley.

A white-plastered shelter ringed in an orange strip. It is built for a prayer wheel. Fierce glacier water pounce at the prayer wheel to push it to spin. A mechanism spread over Bhutan. Water flows out of wood log pipes into a brook. This brook wound around the village.

Wood farm fences, and stone and wire fences are used to divide the valley amongst the villagers.  A short-cut to cross someone’s yard when you lost the trail. We crossed this lady’s yard while she’s cooking in the stone stove. She lives with three cats.

A cluster of two-three storey houses built around Ura Lhakhang (Ura Temple). In any prayer function in the temple, prayer food is offered for birds. Flocks of crows get excited while perching on the electrical line gossiping. This temple was completed in 1986 on the old temple’s site. The popular festival in Ura is the Yakchoe Festival aka Mask dance, which is hosted here, which attracts hundreds of tourists.

Only the temple’s entrance is paved in concrete. The streets around the village are cobblestone covered in cow dungs. The houses show the same architectural style across the region, such as Tibet, Spiti Valley, and Leh & Ladakh, with influences from China and India.

They are in two to three storeys, the ground floor is used as a barn. White-washed stone walls are overtaken by the vibrant paintings around the window.

Almost every house has a garden in the village. Stacks of stone pallets fenced the garden, dried woods placed on top. Timber stables set on the opposite road, at sunset, cowherds wandered to the stables. Yak herds only come to the valley during winter time but they don’t get near the village.

Building the Tallest Pagoda in Bhutan

The village is building the tallest pagoda in Bhutan at the end of the valley. All the expenses are donation based. The villagers without any construction experiences but determined to build the tallest pagoda are at work every day. They volunteer to carry rocks, tie the bamboo frames, and mixed concretes.

It took them five years to complete halfway.

This project is an effort of one village. Everyone is welcome to make a contribution. In his 70s, this man walks to the construction site every day. He contributes to the kitchen with a few others. They make sure there are enough butter tea and food.

Ura does not receive large tourist groups, only day-trippers from Jakar. Tourism makes up a small portion of income, and farming is the main income. Milk and cheese from sheep and yaks are other sources of income since Buddhism does not allow slaughtering. The village provides education up to high school. After that students have to either go to India or Thimphu to continue education. Employment wise, official servant and forest park rangers are the main considerations.

Homestay is the only option in the remoteness of Bhutan. We called the guesthouse’s owner, Karma, a few hours before our arrival. He accepted our request. This guesthouse started by Karma’s father along with the restaurant on the old highway. Later they built the current six bedrooms guesthouse opposite the road. The room is furnished with a fireplace and the wall and floor completed in wood. It feels like a cabin in a forest.

The large fireplace in the common area for big groups. Hot water is fetched from the boiling-pot on the metal fireplace in winter. In summer dab your skin in a glacier shower. The guesthouse is a 20 minutes walk from the main village. Homestay is the only place for food.

While waiting for food to be cooked, take a family tour from decades-old photos on the wall.

Homestay sources ingredients from the local farmers. Vegetarian is the main choice, and chicken is also available. Ura is known for its Matsutake mushroom. Araya Zamlha Guesthouse cooked mouth-watering Matsutake soup. In August, Ura organized a mushroom picking festival. Dishes include Chili Cheese, potatoes, and some greens served with rice.  For breakfast, homemade Wild strawberries and berries jams serve with buckwheat pancake or some homemade butter. It’s difficult to source many things.

There are several homestays in Ura. They don’t actively promote their homestays rather the tour guide takes tourists there. Here is a list of homestay you can request your tour agent to book.

How to Get to Ura?

Ura is about 90 minutes drive from Jakar. Day-trippers come to visit the temple.

The closest airport is in Jakar. One flight per week from Paro to Jakar operates by Drukair.

Late spring to autumn is the perfect time for trekking and walk around Ura.