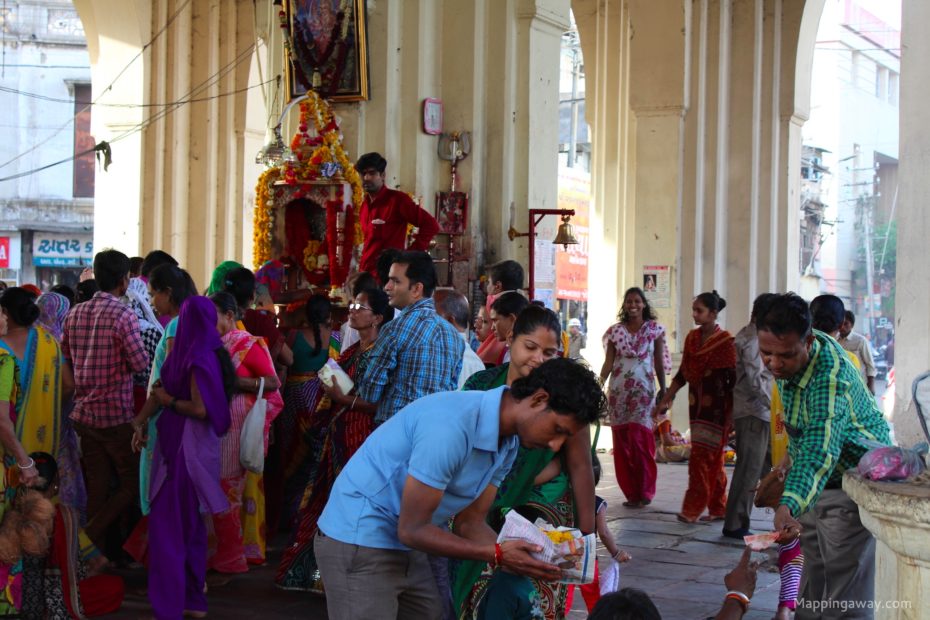 Its former name was Baroda. Vadodara was an Indian state rule by Gaekwad Dynasty for 200 years.

This guide takes you to bustling bazaars, historical walks, and Lakshmi Vilas Palace. If you have one extra day in the city, take a day trip to the UNESCO world heritage site, Champaner.

A 10-day Gujarat trip start-off from Vadodara. My train arrived on time from Bengaluru (Bangalore). Vadodara is the third-largest city in Gujarat. Autorickshaw took me to Arudh Mahal Homestay

. The homestay is a walking distance of bazaars and the Lakshmi Vilas Palace.

October to March are the best time to visit.

March to May is the hot month as the temperature could ascend to 23 to 36 celsius.

June to September is monsoon.

How to Get There?

Flights Only Air India from Delhi and Indigo fly to Vadodara from Bangalore, Chennai, Delhi, Hyderabad, Indore, Kolkata, and Mumbai.

Bus Daily bus runs between Ahmedabad to Bhuj and Vadodara. Overnight bus is the best option to catch up with some sleep and arrive in the early morning. Sahjanand Travels and Patel Travels are recommended by Gujarat Tourism. If you travel on a budget, the state transport buses are an alternative to this.

Train About 123 daily and weekly trains travel between Ahmedabad and Vadodara. The Bhuj Ac SF Express is the fastest train pass by Vadodara in the early morning 4:50 am and reaches Bhuj at 13:15 pm.

IRCTC is the Indian railway corporation. Register an account and book under Foreigner Quota.

Make your booking at cleartrip.com or 12go.Asia

Presumably, you arrive at noon, you can spend your half-day wander Nava Bazar. I explored the bustling Nava Bazar

, which are on the same street, about one kilometer away.

is at the opposite end of the lake. You can explore these two landmarks on Day 2.

End your day at Raopura Tower, then walk to Shree Kathiyawadi Khadki

for Kathiawadi thali. Kathiawadi is a cuisine of the Kathis. Southern Gujarat area uses main cooking ingredients potatoes, eggplants, and jaggery, etc., not much of leafy vegetables.

To beat the crowds and hot sun, be the first one to arrive in Lakshmi Vilas Palace

at 10:30 am. Built by Maharaja Sayajirao Gaekwad III in 1890 in Indo-Saracenic revival style, the lavish palace begins the tour at the lawn and enjoy a good view of the palace. Take the audio guide!

for a Gujarati Thali. If you crave for South Indian thosai/dosa, visit Milkton’s South Corner

The old city marks by four entrance gates in each direction as part of extinct fort “Kila-e-Daulatabad”: Lehripura Gate

. Lehripura Gate considers as the most embellished gate, with elaborated balconies.

Tip: Book an Ola (India’s Uber) or Auto rickshaw to any of the gates to begin your old city tour.

I began my tour from Mandvi Gate, which is not a gate rather a pavilion. On my visit, the gate has served the purpose of a prayer hall. Statue of gods on the pooja mandir “prayer cupboard,” devotees circled around, waiting for their turn to pray. Mandvi Market is a place for traditional leather footwear, those found in Bandra Mumbai, at a much lower price.

It is said that the Jama Masjid used to host Asia’s biggest Quran, written by saint Mohammed Ghauz in the 18th century but it has transferred to Darul Uloom Seminary. The Masjid tucked in the roll of shops in an alley that could easily be missed, yet decorative Islamic carving on the entrance gate might make you look back twice.

Heritage Walks: Open vadodarabyfoot.com on your phone, follow the recommended routes. It comes with English audio :).

If you are tired, take an auto-rickshaw to the market. The market is completed in 1906, the ground floor is for vegetable and fruit markets locates in the courtyard. Walk to the courtyard for a glance of the building structure.

Walk down to Canara Coffee House

for a cup of thick milk tea. If you are in the Khanderao Market area, walk 650 meters to Shri Guruprasad Restaurant

for some signature snacks, sevsal.

Tambekar Wada is a three-story building in a wada style (North Karnataka and some part of Maharashtra) built around the 19th century. The Wada preserves some of the colorful story panels painted in various styles.

Jewish were hired as soldiers by Maharaja Sayajirao Gaekwad III since 1850. A historical graveyard is known as Yehudi Kabristan in Nizampura. The cemetery, unfortunately, its historical value has been neglected.

Hike to the Mahakali Mata Mandir

Setting Vadodara as a travel base allows taking a day trip outside of the city. I checked out of my homestay and left my backpack there.

The major attractions are near the bus stop. Ruins are scattered around the area. Take an autorickshaw if you did not come with a car.

How to Get to Champaner and Around?

Champaner Archaeological Park can be explored by walk and public transportation. I took a public bus from Vadodara central bus station

. I took the bus that leaves around 7:30 am and arrived at 9 am. It’s better to arrive early to beat the heat and it’s a long day to be here.

In Champaner, I used a shared auto-rickshaw service to hop around the sites. Only one main road, so it is convenient to hop on and off the rickshaw. I finished the tour at 3:30 pm and returned to Vadodara at 5 pm to catch the bus to Bhuj.

Car It would be a hassle-free trip to Champaner if you hire a car or drive your own.

Bus  If you are a budget traveler, public transportation is the best option. The bus leaves every half an hour from Vadodara Central Bus Station to Champaner. The ST (State Transport) Bus to Pavagadh takes about 1.5 hours. Many pilgrims come for Mahakalika Mata Temple. Booking is not required.

The best way to get around on foot or Auto-Rickshaw Champaner is walkable to the major sites and the only village. Otherwise, auto-rickshaw is the only option, available for share or hire to Halol.

Halol, the major town, is about 7 kilometers from the archaeological park. Small eateries and tea shops are around the bus stop and in the village. It’s recommended to bring your water and snacks.

What to See in Champaner?

At 9:30 am, I was half-way up to the temple along with a small crowd. The temple hosts the goddess Kalika. It is about 5 kilometers from the bus stop Pavagadh. Hop on shared transportation with the pilgrims that go to the Pavagadh Fort’s Entry point.

Climb up or take ropeway.

On the way up the hill, donkey caravans coming on your way to deliver goods to temple stalls. Venders sell prayer goods and mangos. Red-finger-prints on every step till the last.

The ropeway is another option accessible from the entry point, which takes to the hilltop station, where are all the prayer goods venders at. Temple is built on the highest point of the mountain. A long queue climbs slowly to the temple. A panorama view of the old kingdom looks down to the plains. Upon your return to the Pavangdh bus stop, enjoy a cup of chai at the food stall and some snacks.

A historical city found in the 8th century by Vanraj Chavda, one of the kings of the Chavda Dynasty. There are 114 monuments in the area. If you come in a car, you might be able to visit some of them, such as Ek Minar Ki Masjid is tucked in the bush behind the road.

Opposite the main bus stop is the entrance to the park. Get a ticket from the park ticket office to begin your tour. Ruins of citadel walls and large arched entrance welcome you to the heritage site. Villagers fly through in motorcycles, watch out! This takes you to the private mosque of the royal family, Saher-Ki-Masjid .

You will find direction signboard points to Jami Masjid. The extravagant relief mixed of Hindu and Islamic design and the great domes are most worthwhile to spend time walking around the mosque. Against the landscape of the area, the green garden is well-maintained with lush green grass and pink flowers.  You could pick a nice spot to rest and stare at the monument.

This small village has three streets, see the cow begging for food standing outside villagers’ homes. There are several basic guesthouses in this village and in the main town. If you prefer to stay back and explore the area.

Where to Go After Vadodara?

If you have more time to explore the cities near Vadodara, add Khambhat on your next destination.

Khambhat was once a flourishing trade city. It was mentioned in Marco Polo and Ibn Battuta’s travelogues between the late 13th and 14th century respectively.