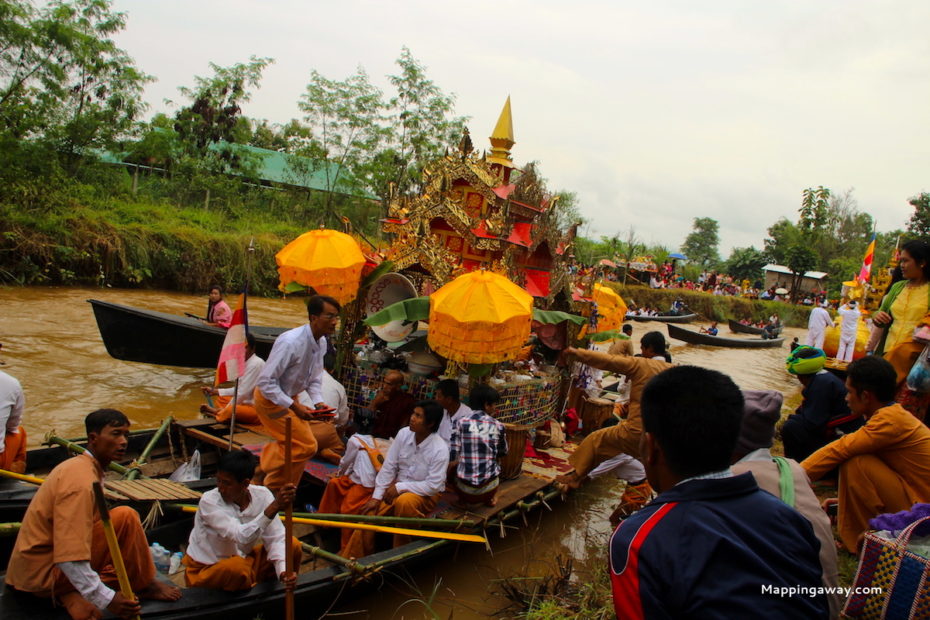 Phaung Daw Oo Pagoda festival continues for more than 20 days during the Burmese month of Thadingyut — October to November — dates vary each year. As an important religious site in Myanmar, the Pagoda housed five small gilded Buddha images. The statues are coated in thick layers of gold leaves.

Eight-hundred-year-old golden images are believed brought to the lake by Alaungsithu, King of the Bagan empire in the 12th century.

Four of the Buddha images are placed in a gilded Karaweik barge, and paraded around Inley Lake’s villages for villagers to pay homage. The barge is being pulled by traditional long boats manned by hundreds of pilgrims. While the gong is playing to signal the barge is coming. Boat racers row with an oar attached to one leg, a tradition in Inley Lake. Some longboats play loud music and throw firecrackers.

Where to See the Festival in Inley Lake?

During the festival, the barge parades around the Inley Lake. Check with your hotel when and where the barge will stop. Hotel can arrange boat transportation for you.

Shortly after we left the hotel, rain clouds accumulated above us. Fishermen were beating the water, this is one of the methods they use for group fishing. Not far into the water causeway to Indein, raindrops hit on my head. Not far into the Inn Thein creek, a narrow canal connects Indein, the embankment washed away flood.

The day visited Indein coincided with market day. The 5 day market rotates between 5 villages and Indein was one of them. The market is a collective of villagers from the surroundings came to pay homage. They put on their traditional dresses, and female put on earrings and hair ornaments. The Pa-Oh people in their indigo dyed outfits and women are in colorful hair wrapped live in the nearby hills.

Various groups dressed in their traditional clothings, held offerings and queue in lines.

A long tradition of offering food and flowers to the Buddha is a way to show respect and count into merits. Tables set up for villagers to place their offerings. It’s decorated with banana stems and chrysanthemums.

When the first longboat arrived, everyone stood up as the gong was playing. The atmosphere was exciting as everyone has expected. Longboats pulled the one after. Some boats have placed more than 50 locals. Firecrackers threw to the air marked the beginning of the celebration.

Karaweik is a mythical bird in the front of the barge. As it arrived, it parked in the jetty and villagers give their offerings.

Buddha Image Parades to Next Village

The festival takes up to 2 hours. But there are more to do in Indein: visiting the pagoda ruins, markets, and temples. After the festival, villagers packed up their baskets and offerings threw into the river as a symbolic of homage.