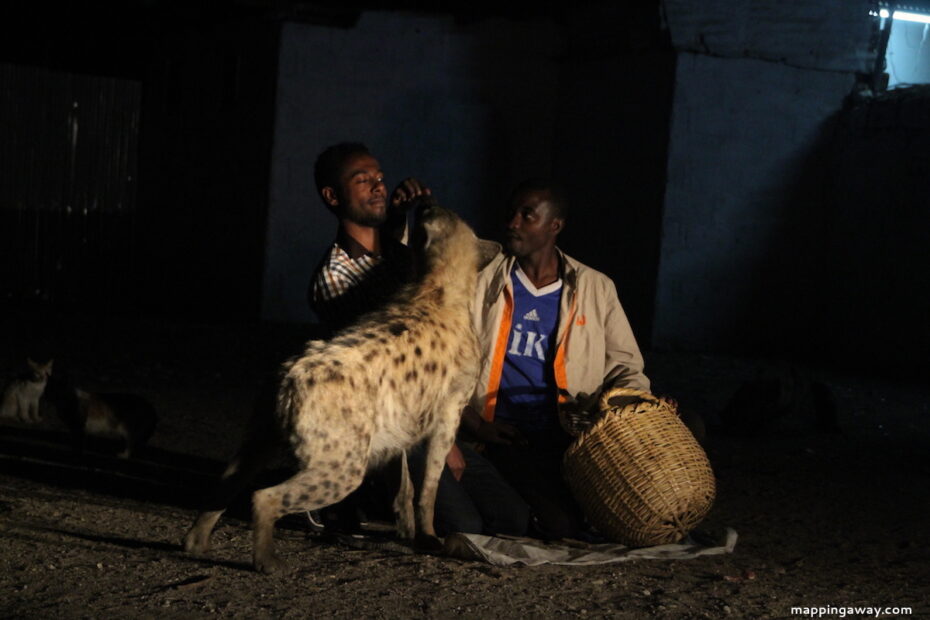 A Quick Guide to old city in Harar. Harar is the “fourth holiest city of Islam” to the Hararis after Jerusalem, Mecca, and Medinah. It’s a city of saints.

Every day, for three days, I plowed the maze of narrow alleyways in Harar’s old city until I hit the fortified wall. Outside of the wall is Harar’s new city. I returned to the city center and took a different direction gate.

As walking into Harar’s old city, after Duke Gate, residents sit in the main street with friends or individuals, stuffing something into their mouth. I immediately realized they are chewing qat. Qat is a narcotic leaf that is chewed and kept in the mouth as a stimulant. Against the country’s Orthodox Christian culture, Harar is a rich Muslim cultural heritage center.

How to get to Harar?

Bus from Addis Ababa,  Meskel Square Terminal is where you take the long-distance bus. Salem, Sky Bus, and few others operate the route to Harar. Cost about 330 bir. 10 hours from 5 am to 2 pm.

Tip: 1. Buy a bus ticket a day ahead. 2. Stay near the bus terminal or make sure a taxi available to take you to the bus terminal in the early morning. (Stay nearby: Tsehay Pension or Wim’s Holland House)

Hararis houses are unique. The best way to experience the houses is by staying in a homestay. Homestay equipped with very basics amenities.

Tips: Bring your own towels and sleeping bag for dust mite or bed bugs :). I was sleeping on the floor for three nights.

There are many comfortable hotels outside of the old city and it’s a few minutes walk to the old city.
Sumeya Hotel $ 44
Wonderland Hotel.

Harar is a fortified historic city located in the eastern part of Ethiopia. The city was founded in the 8th century and Islam was introduced around the 12th century. The walls were built between the 13th and 16th centuries. The Emirate of Hara found in the 17th century that witnessed its glorious period as an important trade center till the 19th century for the coastal and highland areas.

Harar is also “the city of saints”, this expression captured the Sufi mysticism of Harar. As the center of Islamic teaching and the “fourth holiest city of Islam”, an estimated 110 mosques and 102 shrines found in and outside of the wall. The saintly figures’ teachings are still playing significant roles in Hararis’ daily life.

The old city’s complex relationship with hyena is the main attraction. The rulers built the walls had the hyenas in mind, small holes in the walls that allow hyenas to come into the city at night. The local feast for hyena takes place in every Arabic calendar, if the animals eat the food locals offer is a blessing, otherwise an omen. For an in-depth understanding, Marcus Baynes-Rock’s researched book on hyenas in Harar could shed light on the relationship.

The city’s layout and architecture show influence from the African and Islamic traditions. The city planning had a commercial and religious hub in the center of the old city. Three types of residential architecture dominated the residential area: the traditional Harari house, the Indian merchants’ wooden verandas design houses, and mixed style houses. Arthur Rimbaud’s House is the best example built by an Indian merchant in the early 20th century. Italians and Egyptians influenced architectures found within and outside of the city. Today coffee and khat are the primary export of Harar.

Warning: Watch out for sexual assault for single woman travelers. It’s unusual in the neighborhood told by my guesthouse owner. I was assaulted by two teenage boys near my guesthouse and the residents caught them. The boys thought it was fun to humiliate a woman.

It’s interesting to learn what fruits are in season in the place of visit and what varieties the place has. I figured mango is in the season. At this end of the wall, piles of ripe mangos on the ground. Women are the only dealers.

The coffee bean is Ethiopia’s national treasury. But what about coffee beans’ husk? Qishr is a popular drink in Yemen. It’s the husk of coffee beans that are usually throw away but a gem in Yemen. The coffee beans’ husk is much cheaper than coffee beans. The taste does not close to coffee at all rather like tea. It steeps in hot water and serves with honey or sugar. Nancy Um mentioned in her book, Merchant Houses of Mocha (2009), that Qishr is not found anywhere outside of Yemen. However, I found this lady near Erer Gate/Richard Burton Gate sells qishr. She is the only vendor who sells qishr in the lane. And it’s a daily drink for Kara people in the Omo River Valley. Give it a try!

This coffee roaster is right on the lane entrance to Anisa’s Guesthouse, next to the Jamia Mosque. The smell is seductive, you can have a short tour. Half or one kg is available for purchase.

A busy coffee shop in Feres Magala, near Duke Gate, locates on the second floor. It gives you a view of the neighborhood (I forgot the name). It’s a great place for food and espresso.

Get Lost in the Narrow Alleylanes

A non-local man told me he would not walk around Harar by himself. Lanes are confusing and easily get lost. Surprises are everywhere in the fortified city. You have to explore and map it on your mind :). Enjoy walking. You will find your favorite spot at the end of the trip.

Harar has 82 mosques and 102 shrines built in a span of periods by different governance or emir. Jami and Juma mosques are the largest. Shrines are visited by the Sufi followers who believe the personal experience of God could be through ritual and mediations. Sheikh Abadir’s tomb

is one of the important shrines in the old city. Zikri is the main ritual recite God’s name. Another important ritual is Mawlud, the text of the birth of the Prophet Muhammad. Mawlud is recited in shrines and any special events like weddings or seeking protection. Mosques built by Egyptians are also found within the walled city.

Several churches were built in the city. Most notable is the Medhane Alem Church

built on top of the Sheikh Bazikh Mosque in the 19th century.

Every curve seems like a jackpot until you make the next turn in the maze. The resident painted their houses in pink, green, turquoise, and purple, etc.

Photograph of Hararis? The children love to be photographed. The adults are quite reserved. It’s better to ask or buy something from the vendor before taking the photographs.

People from all around Harar, like the hilly villages, sell their produces and livestock in the commercial hub. That usually takes place in front of each gate and there are new marketplaces set up outside of the wall. Women come to sell chicken, spices, fresh vegetables, and firewood in the hope return home with the food or household commodities. I was curious about the local chicken price since they raise only a few for sale. And an old lady vendor was telling me that her husband wanted her to buy a chicken home. Before all, she has to sell out her spices. The chicken price is too high for her to afford. Women hold the chicken in her arm, place it on her head while walk around the city to find buyers. It seems quite efficient.

(Girdir Magala) locates in the center of Harar, which was the largest market in the region but it lost its prominence in the last decades. Gates have different names in Harari, Amharic, Arabic, and Oromo. That depends on whom you talk to. The six gates (bari) are

Varieties of foodstuff and spice market and recycling market near the bus stop.

This is outside of the gate Shoa Ber. The spices market sells all types of spices for Ethiopian cooking. Everything looks like a temporary setup. Metal shacks walled stores. Shades are made out of plastic sacks, when one is worn, a new sack is spread on top.

Argoba Bari sells fruit, vegetable, and khat market, and livestock by Oromo people. Behind this gate is where the fruits market and livestock. Women come in donkeys and unload their goods. The khat market comes to life a little before lunch.

Harar is not only a paradise for photographers as well for sketchers. The unique Harari houses (gey-gar) made up a large proportion of this heritage city as well as the colorful dress women carry. The market is one of the perfect places but it’s just too hot and crowds to find a quiet spot.

A Convenient Shop near Shoa Gate 🙂