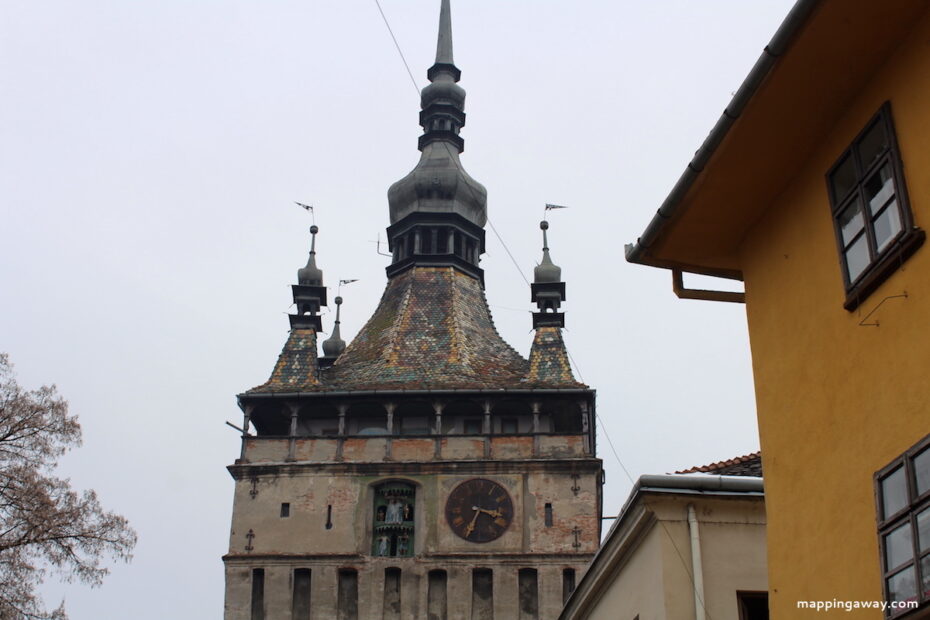 The train station is about 1 km walk from the fortified wall city of Sighisoara. Walking on the Sighisoara’s street alone in the early morning, I looked out my back for followers and street dogs. After crossing the bridge and walking on quiet streets, I saw stairs that connected to the fortified city. I was relieved. I was just paranoia. Romania turns out to be a quite safe country to visit.

Gloomy and cold winter did not stop me from exploring Sighisoara. Melting white blankets are dripping from the roofs. Winter is an off-shoulder season. Only a few shops and hotels open. After sunset, the fortified town becomes deserted. The Church on the Hill and the Clock Tower are the best places to offer a glimpse of the view of the lower town. Other than that, every part of the wall gives you the different landscape of the town.

Sighisoara is a small citadel town that you could explore in half day. Every piece of the cobblestone on the road are part of history. The medieval houses in pastel green, pink, and yellow seem dreamy walking down the skittles’ wonderland. Each corner I turned, I found a surprise color – exactly as I got my favorite skittle color from the packet. Only restaurants, shops, and hotels are the ones you have a chance to observe the medieval building’s interior design.

My guesthouse is right next to the citadel square, PIAȚA CETĂȚII. The benches are left empty in the winter. I guess it is filled with laughter on sunny days. The cold weather is the main reason that keeps me circling the town. There are only 5 main streets in the town and others are narrow lanes to cross between streets. Since it is too cold to take outdoor seating, amble through narrow alleys, take notices on window decors, electricity lines, and doors, etc. are what to do in winter :).

Founded by German craftsmen and merchants who built a new citadel in the 12th century, Sighisoara is one of the most charming and well-preserved medieval towns. Nine out of fourteen towers are preserved today that erected between the 12th to 14th centuries against the Turkish invasion. Strategically located on the tip of the hill, Sighisoara was a flourishing trade town. The guilds in the city contributed to the tower’s construction and maintenance. As we see, towers were named after them:

The clock tower is a museum that offers a spectacular view of Sighisoara. More to that, the fine craftsmanship of the roof and clock has made this tower a symbol of Sighisoara. Built-in the late 14th century, the clock is still functioning in the exact hour. The tower opens to tourists except for Monday. You can visit the tower and see the clock mechanism.

Two days is more than enough to tour Sighisoara. I also spent half-day exploring the city outside of the fortified wall, although there is not much to see. The local lady I met in the guesthouse could not even recommend me any places to visit outside of the wall :). I just strolled.

The Scholar’s Stairs you won’t miss next to the souvenir shops. The long stairs have been around since the 17th century that built for the students for the harsh winter season. Be aware of slippery grounds as you get to the Church on the Hill. The Saxon Cemetery is open and the oldest graves dated back to the 17th century. I am not sure winter is a good season to visit as a large white blanket on top of the graves.

How to Get to Sighisoara by Train?

I took the direct train from Sibiu to Sighisoara. I recall Sibiu has two trains to Sighisoara: one is in the morning around 6 AM and the other is around 11 AM. You can check the timetable at the ticket machine upon your arrival in Sibiu. It takes about 2:30 hours to cover 97 km. The train is empty and quite clean for a short distance train. You do not have to book tickets in advance.

Where to Stay in Sighisoara?

located next to the main square. In the off-season, it is a quiet place to stay. No other guest shared the dormitory with me. They offer a breakfast and lunch menu. $15-18 4 pax dormitory