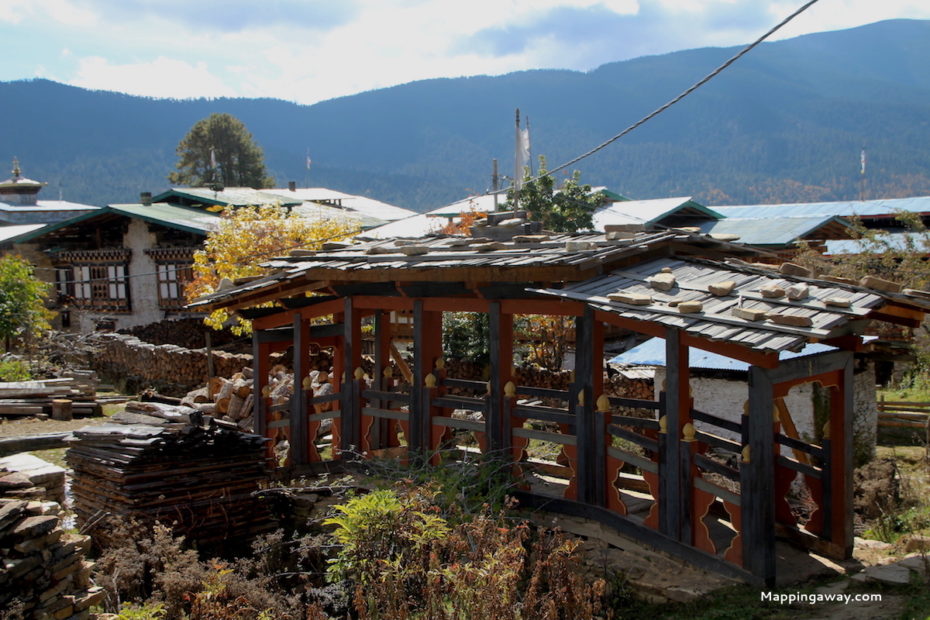 A quick guide to Shingkhar. A remote village in Ura Valley captures the essence of Bhutan.

Shingkhar literally means a wooden cabin/house. Legend has it that a follower of master Longchen built a cabin to invite him to preach in the valley. Shingkhar referred to the cabin.

The Bumthang-Ura Highway circuits Shingkhar onward to Mongar. The 10 km unpaved and bumpy road takes up to 40 minutes’ drive. We stayed in Ura valley. We left for Shingkhar after having buckwheat pancakes for breakfast.

Kharphu is a Bon festival celebrated in central and eastern Bhutan at different times of the year. Bon is an ancient religion practiced in Tibet before Buddhism’s arrival. Shingkhar and a few other villages celebrate the Kharphu festival in the 9th month in the Bhutanese religion (November).

The village is small and takes less than an hour to explore. Climbing to the temple on the opposite side of the village you can clearly see the farmlands and the forest land stretch through the valley.

Walk around the village and discover every corner. We were approached with friendly smiles from the villagers. Shingkhar is home to 300 residents. On the day I visited, villagers were busy unloading sacks of potatoes to the truck.

One can easily spot Magpies here as they come to eat the orange berries that are found in almost every household garden. Magpies and cattle outnumber crows in Shinghkar.

The village is divided by a small stream that is connected by this bridge.  Water flows through the prayer wheel then underpass the bridge. Here is a place where women gather, do laundry and socialize.

The houses are constructed on the slopes. They are built in the traditional architectural style by using wood and stone pallets. They use what they source locally. Except for few new houses that have corrugated roof sheets. The traditional houses are in wooden shingle roofs, and stones to put weight on them.

Based on the height of weeds growing in this garden, this house is sadly abandoned for a long period. Window frames show signs of deteriorating.

Not far from it, a new house is under construction. A red-painted phallus carved in wood placed above the doorway to ward off evil spirits. Phallus traces its origin from Chimi Lakhang in Punakha. This symbol also means to bring good luck and fertility.

Potatoes are the main ingredient in Bhutanese cuisine besides chilly and cheese. Suitable for high altitudes, potatoes have become a cash crop for many farmers in the highlands. Transporting crops to capital or district capital, Jakar, is not easy for the rural areas. So they sold them in bulk to wholesalers.

Shingkhar Dechenling Temple was one of the ‘Eight Pleasant Places’ found by the great Nyingmapa master Longchen Rabjam in the mid-14th century. Nyingmapa is the oldest of four Tibetan Buddhism schools that have preserved in Bhutan. The lineage carries down to his great-grandson, Tsezang Thaye Dragpa who became the first Shingkhar Lama. The temple is being looked after by the descendants. The

Droki Rinchen Juney was master Longchen’s residence, built on a hillock. He meditated at the temple in Shamzur, below a cliff.

Late spring to autumn is the perfect time for trekking and walk around Shingkhar.

What to see around?

Hike to Sinmela pass and Shamsur

2-Day Hike from Jakar to Shingkhar

Where to Stay in Shringkha?

Shingkhar Naktshang Heritage Farmstay is the only homestay in this small village. If you come during summertime, camping is a great option. Otherwise, Ura is another place could spend a night.

How to Get to Shringkha?

Ura is about 90 minutes drive from Jakar.

The closest airport is in Jakar. One flight per week from Paro to Jakar operates by Drukair.