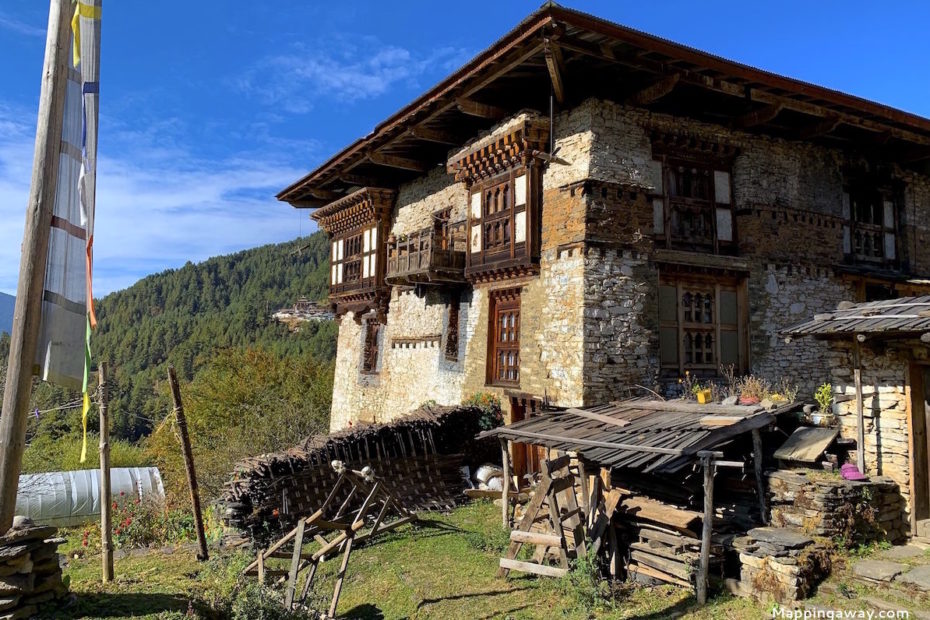 Naspe is the remotest area you can drive to up north from Jakar, Bumthang’s capital. The road to Naspe is bumpy and dirt road for about 19.5 km, took 2 hours from Jakar. Hiking in Choekhor Valley, walk along Bumthang Chhu river takes you to Naspe from Jakar. Several family-owned temples are found in Naspe, tracing back to many generations with historical significance, including the one we stayed.

I was already missing Ura Valley, imagining Naspe would be like Ura, a large valley with meadows and spring streams. In Naspe, the Bumthang Chuu river cut across the valley.

Traveling in Bhutan, I personally preferred visiting highland areas, given varying vegetation, and yaks outnumber inhabitants. One of the highlights of today’s itinerary is visiting the sacred sites in Tang’s Valley, the Burning Lake, found by Pema Lingpa in the 15th century, who is a great treasure finder. The unpaved curvy road ascends to the narrow valley that is heavily forested by pines and some buckwheat farms. The valley comprises some villages and few sacred monasteries.

The legend has it that Peman Lingpa dreamt of the lake was the secret spot of the sacred treasures hidden by Guru Rimpoche. Prayer flags between pine trees. A small scale wooden bridge built on the large boulders. A short walk takes 5 to 10 minutes down to the lake.

Dzong is a typical architecture found in Tibet and Bhutan that is built in a strategic site overlooking a valley for defense purposes. The Penelope, area governor, ruled the area from the fortress in prior to Bhutan’s unification. It served the religion, military, and social center.

A total of 5 dzongs adorns Bhutan, each of them share a similar structure but varies in size. Punakha Dzong is the second-largest and popular among tourists. I specifically adored Trsongsa Dzong’s strategic site, closest to the cliff, and defended by mountains ranges and river with commanding view of the greater valley.

Jakar Dzong situated on the ridge of Jakar town. It’s adminsitrative office and a monastery on the other end. Following our short visit to Jakar’s dzong, a fortress administration building, we took a left turn, that continues to the city center.

Tip: If you did not get to visit the post office in Paro or Thimphu, send it from Jakar! The post office is in Jakar’s city center. You will receive it in 2 – weeks.

We learned a monastery’s inauguration near Ngala Lhakhang aka Ngang Lhakhang. There would be religious rituals and prominent monks and nuns attended. Trucks and buses of monks and nuns drove from the opposite direction as us. We realized the inauguration event has ended.

The three-storey homestay built on the slope has a large cobblestone courtyard. The wooden stairs lead to the entrance, where they have the family rooms, and other steep stairs to the living room, kitchen, and guest rooms. In the large living room, they had a traditional stove and a fireplace. Toilets are the new extension to this farmhouse, provided with hot water. You wake up in the morning and see the valley through these small windows.

The family has more than 10 or more cows to provide milk for cheese and butter consumption. They harvest buckwheat, potatoes, and other grains and vegetables from their farms.

Ngang Monastery is a private temple built in the 15th century by a Tibetan lama, Mamkha Samdrup. His collateral descendants are caretakers of the temple and their home is 100 meters from the temple. Lama Mamkha spotted swans flying in circles and landed in the Ngala Monastery temple’s location. The swan was an auspicious sign to the lama and he decided to build his residence there. The family pointed out the water body where the swan landed is in front of the prayer table. The temple extended to two floors. The temple hosts a 3 days festival in the 10th of Bhutanese month.

Since it’s a private temple, Ngang receives visitors all the time, mostly monks. The centuries-old statues placed in the prayer room behind the living room. It’s the elders’ early morning ritual to fill up water in copper bowls, place flower vases, and sweep the floors. In wintertime, grandpa sits in the courtyard for morning sun while chanting.

What to See in Naspe?

Explore the surroundings of Ngang Lhankhang is best by foot. You can camp in the nearby camping ground in the summertime.

The ruin of Drapham Dzong is 30 minutes walk by foot from Ngala Lhakhang. It’s strategically built on top of a hill that overlooks the greater river valley. The road to climb up to the Dzong is not clear, overgrown of weed grass as tall as 4 feet. The ruins are isolated on the hill with few unknown age trees. The ruins are left of crumbling stone walls. You can walk around and imagine its original structure

A joint archaeological excavation by the Department of Culture and the Swiss government discovered that the Dzong built in the 16th century and destroyed in the 18th century. It was the residence of Chhoekhor Deb who ruled the Chhoekhor valley 600 years ago. The study has also found Chhoekhor Valley was part of the Tibet – India trade route.

Harvest had just been done a month back. It’s waiting for winter to come. They are let alone to rest.

This short trek around Ngala Lhakhang can be done in half day. Small streams wound around the valley into the river. Dip your feet into the glacier water :).

The End of Naspe Valley

Walk to the last village in Naspe Valley takes about 2 hours 30 minutes, 9 km, along the Bumthang Chhu River. Kindergarten and elementary schools, and few small villages are on the way. We made a quick stop to the private temple but it was closed. It is believed that Guru Rinpoche has left his fingerprint there. The farmhouses are two to three-storey. Archery is Bhutan’s national game. We met three men practicing the game.