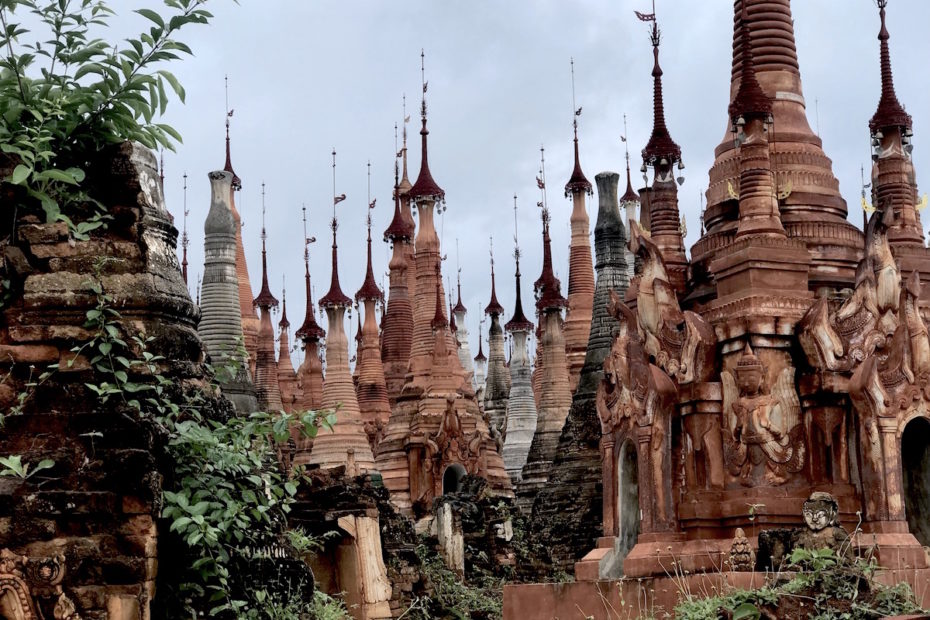 An easy guide to Indein Market and Pagodas

My visit to Indein Market coincided with the Phaung Daw Oo Pagoda festival. The place was crowded, could not even pass through the bridge.

How to Get to Indein Market?

Private or shared boats can be organized from hotels.

The festival attracted many locals from other parts of Inle Lake.The crowd might not be should to shoulder on market days. Or I thought so. The people you will notice are the Pah-O, in indigo or black traditional clothes, and women’s head wrapped in a colorful fabric. The weather was not on our side. On a drizzling day, vendors moved to temporarily set bamboo tents and the hall enclosed by bricks. Locals sell their grown products here, you will find tea, herbs, and flowers, etc.

Locals bought rice and other side-dishes before having family picnic by the river bank. Rice wrapped in lotus leaves are sold by weight.

I was curious about the stuffing in this snack. The lady boiled them in a large wok, I asked her for one. She actually has set up tables in the next tent. Her daughter and husband helped out here. She cut the rice cake into four pieces and showed me chili paste and stuffed it with fat meat 🙂

Many local dishes served in the market. It’s too many to try. I could walk to the locals’ tables just to see what they are eating :).

Indien is well-known for the two groups of ancient pagodas. Ancient pagodas are crowned in golden ornaments. Some are either in its original state and crumblings, and others are restored through donations. You will find statues of Buddhas in various size hosts inside the crumbled pagodas, that are nearly covered by fallen bricks. The pagodas are in a desperate state that required a lot of preservation works.

This group of ancient pagodas catches eyesight upon your arrival in the jetty. The landscape turned to be mystical in a drizzling day. They are neatly standing next to each other in a forest. Trees sprouted up on the pagoda’s tops as it’s blocking the burning sun. Patches of lush grass grow on the pagodas. weeds are clear-out on the muddy paths. In normal good days, locals bring their herbs to here and pass here. On the day of the visit, everyone was waiting for the Buddha image by the river banks.

In contrast with Nyaung Ohak pagodas ruins, Shwe Inn Thein pagodas are better preserved. The oldest inscriptions found are from the 14th century and the others are built around the 17th century. They are believed to be built by the kings from Bagan.

They are located on a hill, a long walkway takes you there. The bricked walkway filled up with souvenir vendors sell puppets, antiques, scarves, and other handicrafts. Paved in tiles, the pathways around the pagodas are slippery on a rainy day.

Interestingly, two young men stood out in the walkway. They were selling books and one of the them was the author. According to the author, it’s a collection of poems and stories around this area. If anyone has found the translated version, do share with me:).