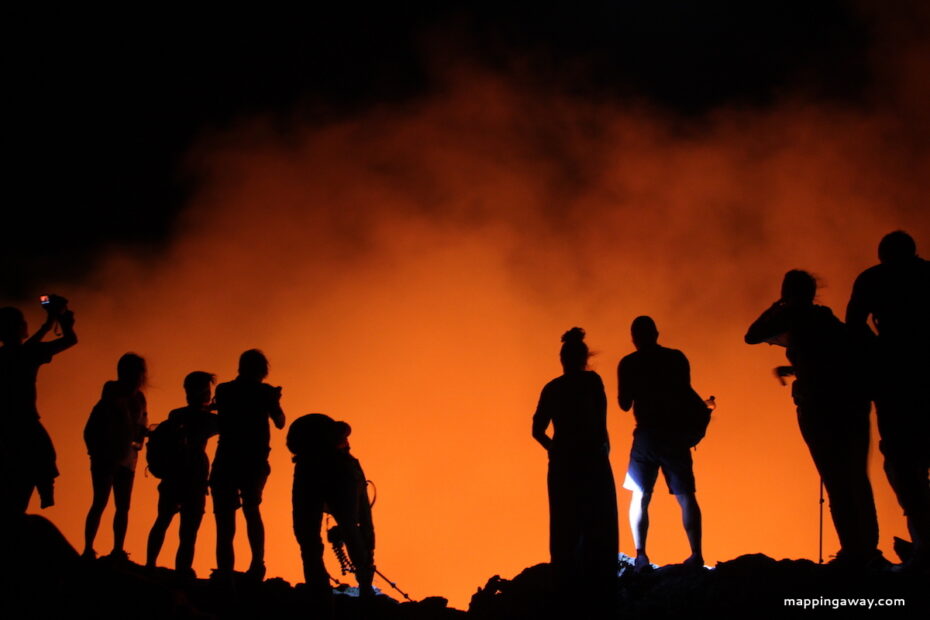 “At 125 meters below sea level, Danakil is one of the lowest places on the planet.”

Trees or plants only come to sight after miles. Danakil Depression is an empty vast land for the wildlife to roam freely. Ostriches’ speed like a fire rocket as nothing could stop the flightless birds. Life is harsh in this land for all inhabitants. The wonder landscapes, like salt lake or saltpans, boiling lava, and hot spring are all found in Danakil.

“One of the hottest places on the planet.”

Inhabitants dream of and wish for rain. Trucks after trucks of water are delivered to villages; it’s not sufficient to combat the growing populations. The region only receives 100 to 200mm of rainfall per year. That being said, drought is a persistent issue faced by the communities. Ranked as the hottest place, the average temperature is 34 Celsius. The unbearable heat waves stroke the visitors.

Located in north-east Ethiopia, border by Eritrea, the Danakil Depression, a deserted valley stretching from the Dallol volcano in Ethiopia to the salt plains of Lake Assal in Djibouti, formed on three tectonic plates are drifting apart. In this harsh, vast land, facilities are below the basic line.

About the Danakil Desert

The Afar region is home to the Afar people whose language is Afar spoken by 1.5 million people in Ethiopia. They are nominally Muslim. Arabic is spoken widely with slightly different accents. You can communicate with the Afar in Arabic in the Danakil Depression. Traditionally, the Afars are nomadic pastoralists. Socially organized in a patriarchal system, women are responsible for domestic labor like, building shelters, collecting wood and water, and preparing food, and raising young animals. The men’s role includes community leadership and herding cattle and camels.

The Afar set up semi-permanent villages and a few townships are built in the region. Mobile shelters are still the best fit for the nomadic lifestyle. The pastoral economy is dominated by livelihood; they raise goats, camels, and donkeys. Another main source of income is salt Mining in the Danakil Depression. Salt mining has been centuries-old trade in this area. Independent mine traders use camel or donkey caravans to transport salt slabs in highland cities.

What city does the Danakil tour start?

Mekele is the city where all tours begin. Bus and flights are well-connected to Addis Ababa. I took a bus from Lalibela to Mekele. It is a bit tricky since there is no direct bus. If you are in the same situation, take a bus to Woldiya and a minibus to Mekele. The minibus leaves for Mekele when it’s full.

is next to the bus station. Great to catch the morning bus. It has very poor facilities
Rewina Guest House

is a budget hotel on the main road.

How to get to the Danakil Depression?

Danakil Depression is only accessed through an organized tour. Prices vary from the season, the number of people on the tour, and security, and agency. The price for individual range from $250 – $450 for 3 Days 2 Night tour. The price includes food, accommodation, water, and tickets, security etc. Some agencies set a basic price like $250-$300, but you must negotiate because there is still some room for it :). Book your tour when you are in Ethiopia if you have a few weeks there.

Tip: There are many informal salespersons in Addis Abba, Mekele, or any cities who link to one tour operator in Mekele. The first person who introduces you to an agency is the final price for you if they have taken your name and phone number. Even other salespeople tell you that they could negotiate for you, it won’t work, if it’s the same operator. The commission goes to the first salesperson.

How many people in a SUV?

3 to 4 people share 1 SUV. I was happily sharing an SUV with two others and sat next to the driver. The journey was comfortable for me. But others shared by 4 people which is a bit stressed and tiresome.

The food serves by the tour are including pasta, rice, meat, and vegetable. A chef travels with the tour group to prepare food on spot. The chef-prepared soup, fried goat meat, and salad in my tour group, and it was decent.

Tip: In general tour operators would be able to arrange any special request like vegetarian, koshary, and allergy.

Accommodations are below the basic line, more like a camping trip in the desert. In the camping area, woven cot bed or thin mattress for sleeping in an open area and staring at the starry sky. And if near the town or pass by, the guesthouse is available provided thin mattresses on the ground and squat toilets. I was happy when I finally took a shower on my second day. Don’t bother to bring a full pack of toiletry or makeup kits, just toilet paper and loads of sunscreens.

It’s a long drive to Hamed Ela. The journey takes more than 8 hours for 260 km on a pretty new road. But before getting to the camp, stopping at Lake Asale for a spectacular view of the caravans and sunset. From distance, the caravans create motion pictures of horizontal dots. On the way, you see many Tigrean and Afra villages.

Hamed Ela is the base camp for Dallol, where a night is spent here outdoor. Lake Asale is a dried salt lake, occasionally a shallow lake formed after rain and you can see a rainbow. It naturally forms saltpans. The large and small pack of camel and donkey caravans pass by here, carrying the salt slabs to Berhale, Abala, or Desi’a, etc. There are no toilet facilities on the road. The tour takes stops for the outdoor toilets.

The vast horizontal lake, caravans form an unbreakable chain, approaching us slowly. Lake Asale is on one of the historical caravan trails that covered 160 km+ distance. With road developments, the caravans only cover half the distance. Caravaners transport salts from Lake Asale to the highlands, like Abala or Desi’a. The transnational salt trails were created to transport salt to other countries. The caravaners could be Christians from the highlands or the Afar. Some caravaners even hired pack animals from villagers. Else, caravans are sometimes passed down through generations to continue this centuries-old livelihood. So they actually earn only enough for basic household supplies. The other people involved in this trade make more than the caravaners.

On this trail, approximately 70,000 animals carrying 10-20 thousand tons of salt passed each year highlighted by researcher Helina S. Woldekiros. Many sites are created on this journey as resting places for the caravaners. My guide told me large camels to carry an estimated 25 to 30 salt blocks and smaller could be 20 slabs. The salt trade prices vary each week.

The caravans leave the salt mines either in the morning or evening. They walk about 2 to 3 days to Berhale or a week to Mekele to sell the salt blocks. Besides carrying salt blocks, the camels also carry gallons of water, cooking utensils, and caravaners’ personal possession, etc. On Day 3, we visited the salt mines.

Dallol proves Danakil Depression is an otherworldly destination. What I have missed from Yellowstone Park in the USA, I found them in Dallol. There is no barrier, tourists can walk anywhere in the hot spring. That is quite dangerous and could cause harm to the hot spring. I hope this would improve in the future.

The combination of red, yellow, and lime green created a picturesque landscape. It’s a short walk to the Dallol.

A Night Spent At Erta Ale

In the dark, I saw a red flame behind the huts. The night on Erta Ale accompanied by a strong wind. It looks like there’s an abandoned village. But I guess they are shelters for tourists. The hike began at around 11 pm. That means the camel porters transported mattresses and water to the shelter. The mattress was thin and the ground was rocky coupled with strong wind. A sleepless night. We descended at around 6 am. The night tour does not recommend to anyone with back pain and health issues.

Erta Ale – the name means smoking mountain – is an active volcano that erupts from time to time. Around the volcanic crater areas, newly erupted lava flow just dried-up. Tiptoe walk on the dried lava flow, the flashlight did not really help. When you lost the group trail, you have to watch out for yourself. I believe in some areas the lava flow produced the shelly pahoehoe. A foam like mixture of lava and gas bubbles separated into the gas-only top and lava-only bottom. When stepping on the foam-type top lava flow, your foot sinks into a crust hole. The crust is sharp and it could cut the skin easily. There is no barrier around it. We all stand on the edge of the moon of the crater. Watch out for safety!

The boiling lava lake is so clear. The steam and sulfuric smell were not strong even with the strong wind.

Lake Asale has the major salt deposit in Danakil. Under the hot sun, salt miners cut the salt pan surfaces then shape them into a standard size. The standard size slabs were currency in the old days. This is a highly laborious work. After caravaners pack slabs onto camels and donkeys back and leave for the long journey, the miners stay back.

Bring a Swimming suit to Lake Afrera. It’s like the dead sea where you float in the saltwater. Lake Afrera locates between Erta Ale and the Alaita-Tat Ali ridges, and 102 meters below sea level. Hot spring water flows to the lake, with palm trees along the banks that are the only shades on hot days. Around the lake, rows of salt ponds and shelters. On our visit, no one was working. The well-organized salt pans mostly owned by companies. They are very different from the laborious salt mines.